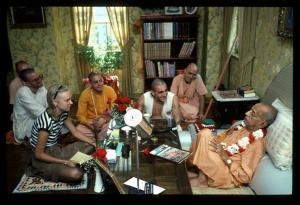 When Lord Brahmā heard the wonderful ceremony going on near his planet, accompanied by music and songs and sounds of "Jaya! Jaya!" he immediately came down to see the function. Upon seeing so much glorification of Lord Kṛṣṇa, he was completely astonished.

Here the word anti means "near," indicating that even in the higher planetary systems near Brahmaloka, like Maharloka, Janaloka and Tapoloka, the festival of glorification of Lord Kṛṣṇa was going on.