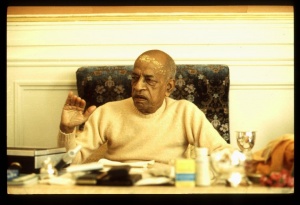 After granting His son Brahmā permission to leave, the Supreme Personality of Godhead took the calves, who were still where they had been a year earlier, and brought them to the riverbank, where He had been taking His meal and where His cowherd boyfriends remained just as before.

The word sva-bhuvam, "to His own son," indicates that Lord Kṛṣṇa forgave the offense Brahmā had committed and treated him with affection, as His son. It is stated in this verse that the original cowherd boyfriends and calves were situated just as before: near the bank of the Yamunā River and in the forest, respectively. Previously the calves had disappeared within the forest and Lord Kṛṣṇa had gone to search for them. Not finding them, the Lord had returned to the riverbank to discuss the situation with His cowherd boyfriends, but they had also disappeared. Now the cows were once again in the forest and the boyfriends once again on the bank of the river, ready to take their lunch. According to Śrīla Sanātana Gosvāmī, the calves and boys remained in the forest and on the riverbank, respectively, for one full year. Lord Brahmā did not actually take them away to another place. By the Lord's omnipotent illusory energy, the gopīs and other residents of Vṛndāvana did not notice the calves and boys, nor did the calves and boys notice the passing of a year's time or feel any hunger, cold or thirst. All this was part of the pastime arranged by the Lord's illusory potency. Lord Brahmā thought, "I have kept all the boys and calves of Gokula sleeping on the bed of my mystic potency, and to this very day they have not risen. A similar number of boys and calves have been playing with Kṛṣṇa for one whole year, yet they are different from the ones illusioned by my mystic potency. Who are they? Where did they come from?"

Nothing is invisible to the Supreme Lord. Thus Lord Kṛṣṇa appeared to be searching for the calves and boys only to enact the dramatic pastime of bewildering Lord Brahmā. After Brahmā surrendered and offered prayers, Lord Kṛṣṇa returned to the original boys and calves, who appeared exactly as before, although their size had somewhat increased because of one year's growth.