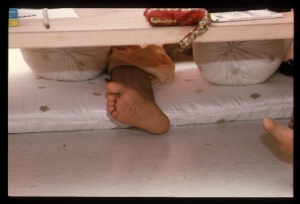 In heaven, on earth or in the subterranean sphere, what women are unavailable to Him? He simply arches His eyebrows and smiles with deceptive charm, and they all become His. The supreme goddess herself worships the dust of His feet, so what is our position in comparison? But at least those who are wretched can chant His name, Uttamaḥśloka.

Śrīla Viśvanātha Cakravartī states that Rādhārāṇī's speech, expressing all the feelings of a disappointed lover, indicates an intensity of love for Śrī Kṛṣṇa surpassing even that of the goddess of fortune. While all the gopīs are perfectly compatible with Śrī Kṛṣṇa in terms of their beauty, temperament and so on, Śrīmatī Rādhārāṇī is especially so. In Her forlorn state, Rādhārāṇī indicates to Kṛṣṇa, "You are called Uttamaḥśloka because You are merciful to the wretched and fallen, but if You would be merciful to Me, then You would actually deserve this exalted name."

Śrīla Viśvanātha Cakravartī further points out that in this verse, Śrīmatī Rādhārāṇī expresses Her spite born of pride, accuses Kṛṣṇa of being a cheater and finds fault with His behavior. Thus this verse contains speech known as ujjalpa, as described in the following verse of the Ujjvala-nīlamaṇi (14.188):

"The declaration of Lord Hari's duplicitous nature in a mood of spite born of pride, together with jealously spoken insults directed against Him, has been termed ujjalpa by the wise."