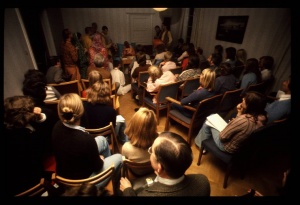 The furious Lord of the Yādavas then threw aside His club and plow and with His bare hands hammered a blow upon Dvivida's collarbone. The ape collapsed, vomiting blood.

In Kṛṣṇa, Śrīla Prabhupāda writes, "This time Lord Balarāma became most angry. Since the gorilla was striking Him with his hands, He would not strike him back with His own weapons, the club or the plow. Simply with His fists He began to strike the collarbone of the gorilla. This striking proved to be fatal to Dvivida."