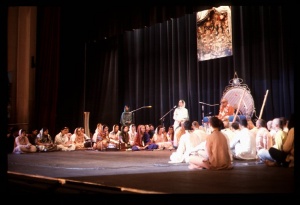 Even today the city of Hastināpura is visibly elevated on its southern side along the Ganges, thus showing the signs of Lord Balarāma's prowess.

Śrīla Prabhupāda writes as follows: "For the most part it was the practice of the kṣatriya kings to inaugurate some kind of fighting between the parties of the bride and bridegroom before the marriage. When Sāmba forcibly took away Lakṣmaṇa, the elderly members of the Kuru dynasty were pleased to see that he was actually the suitable match for her. In order to see his personal strength, however, they fought with him, and without any respect for the regulations of fighting, they all arrested him. When the Yadu dynasty decided to release Sāmba from the confinement of the Kurus, Lord Balarāma came personally to settle the matter, and as a powerful kṣatriya He ordered them to free Sāmba immediately. The Kauravas became superficially insulted by this order, so they challenged Lord Balarāma's power. They simply wanted to see Him exhibit His inconceivable strength. Thus with great pleasure they handed over their daughter to Sāmba, and the whole matter was settled. Duryodhana, being affectionate toward his daughter Lakṣmaṇā, had her married to Sāmba in great pomp.... Balarāma was very satisfied after His great reception from the side of the Kurus, and accompanied by the newly married couple, He started toward His capital city of Dvārakā.

"Lord Balarāma triumphantly reached Dvārakā, where He met with many citizens who were all His devotees and friends. When they all assembled, Lord Balarāma narrated the whole story of the marriage, and they were astonished to hear how Balarāma had made the city of Hastināpura tremble."

Thus end the purports of the humble servants of His Divine Grace A.C. Bhaktivedanta Swami Prabhupāda to the Tenth Canto, Sixty-eighth Chapter, of the Śrīmad-Bhāgavatam, entitled "The Marriage of Sāmba."