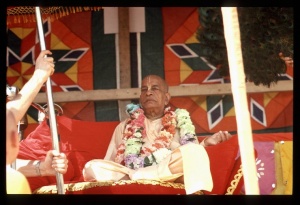 Thus, by renouncing all material association and practicing austere penances, we queens have all become personal maidservants of the self-satisfied Supreme Lord.

In the opinion of Śrīla Viśvanātha Cakravartī, Śrīmatī Lakṣmaṇā became embarrassed when she realized that she had been talking about herself, and so she spoke this verse praising her co-wives. In her humility Lakṣmaṇā claimed that Kṛṣṇa's queens, unlike ordinary wives, could not bring their husband under control, and thus they could relate to Him only as servile housekeepers. In fact, however, since the Lord's queens are direct expansions of His internal pleasure potency (hlādinī-śakti), they fully controlled Him with their love.