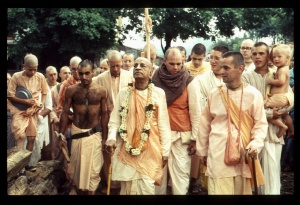 O King, thus the Personality of Godhead, who is devoted to His own devotees, stayed for some time with His two great devotees Śrutadeva and Bahulāśva, teaching them the behavior of perfect saints. Then the Lord returned to Dvārakā.

In his narration of this pastime in Kṛṣṇa, the Supreme Personality of Godhead, His Divine Grace A.C. Bhaktivedanta Swami Prabhupāda concludes, "The instruction we receive from this incident is that King Bahulāśva and Śrutadeva the brāhmaṇa were accepted by the Lord on the same level because both were pure devotees. This is the real qualification for being recognized by the Supreme Personality of Godhead. Because it has become the fashion of this age to become falsely proud of having taken birth in the family of a kṣatriya or a brāhmaṇa, we see persons without any qualification claiming to be brāhmaṇa or kṣatriya or vaiśya. But as it is stated in the scriptures, kalau śūdra-sambhava: 'In this age of Kali, everyone is born a śūdra.' This is because there is no performance of the purificatory process known as saṁskāras, which begin from the time of the mother's pregnancy and continue up to the point of the individual's death. No one can be classified as a member of a particular caste, especially of a higher caste-brāhmaṇa, kṣatriya or vaiśya—simply by birthright. If one is not purified by the process of the seed-giving ceremony, or Garbhādhāna-saṁskāra, he is immediately classified among the śūdras, because only the śūdras do not undergo this purificatory process. Sex life without the purificatory process of Kṛṣṇa consciousness is merely the seed-giving process of the śūdras or the animals. But Kṛṣṇa consciousness is the highest perfection, by which everyone can come to the platform of a Vaiṣṇava. This includes having all the qualifications of a brāhmaṇa. The Vaiṣṇavas are trained to become freed from the four kinds of sinful activities—illicit sex, indulgence in intoxicants, gambling and eating animal foodstuffs. No one can be on the brahminical platform without having these preliminary qualifications, and without becoming a qualified brāhmaṇa, one cannot become a pure devotee."

Thus end the purports of the humble servants of His Divine Grace A.C. Bhaktivedanta Swami Prabhupāda to the Tenth Canto, Eighty-sixth Chapter, of the Śrīmad-Bhāgavatam, entitled "Arjuna Kidnaps Subhadrā, and Kṛṣṇa Blesses His Devotees."