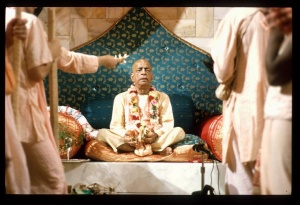 Thus may the presiding demigods of these three worlds kindly show their mercy upon me. Indeed, Mahārāja Khaṭvāṅga was able to achieve the spiritual world in a single moment.

The brāhmaṇa of Avantī thought that although he was an old man who might die at any moment he could follow the example of Mahārāja Khaṭvāṅga, who achieved the Lord's mercy in a single moment. Mahārāja Khaṭvāṅga, as described in the Second Canto of Śrīmad-Bhāgavatam, fought valiantly on behalf of the demigods, and they offered the king any benediction he might desire. Khaṭvāṅga Mahārāja chose to find out the remaining duration of his life, which unfortunately was a single moment. The king therefore immediately surrendered to Lord Kṛṣṇa and achieved the spiritual world. The brāhmaṇa of Avantī desired to follow this example; with the blessings of the demigods, who are all devotees of the Lord, he hoped to become fully Kṛṣṇa conscious before giving up his body.