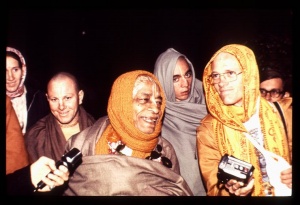 Just as an improperly treated disease recurs and gives repeated distress to the patient, the mind that is not completely purified of its perverted tendencies will remain attached to material things and repeatedly torment the imperfect yogī.

Sarva-saṅgam refers to one's stubborn attachment to material objects of so-called enjoyment, such as children, wife, money, nation and friends. One who increases his attachment to children, wife and so on, although supposedly performing devotional service to Lord Kṛṣṇa, is understood to be either a kuyogī, as described in this verse, or a bewildered neophyte who has failed to properly treat the disease of the heart called material attachment. If one has repeated relapses into material attachment, he has failed to eradicate the darkness of ignorance from his heart.