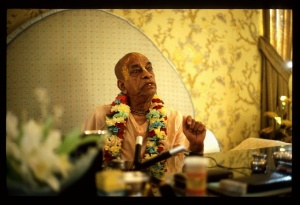 Sometimes the progress of imperfect transcendentalists is checked by attachment to family members, disciples or others, who are sent by envious demigods for that purpose. But on the strength of their accumulated advancement, such imperfect transcendentalists will resume their practice of yoga in the next life. They will never again be trapped in the network of fruitive work.

Sometimes sannyāsīs and other spiritual teachers are bewildered by flattering followers and disciples sent by the demigods to embarrass spiritual leaders who are lacking complete spiritual knowledge. Similarly, spiritual progress is sometimes checked by attachment to one's bodily relatives. Although an imperfect transcendentalist may fall down from yoga practice in this life, he will resume it in the next life on the strength of his accumulated merit, as described in the Bhagavad-gītā. The words na tu karma-tantram indicate that a fallen transcendentalist does not have to pass through the lower stages of fruitive activity and gradually be promoted to the practice of yoga. Rather, he will immediately resume his yoga practice at that point at which he left it. Of course, one should not presume to fall back on the facility offered here but should try to become perfect in this lifetime. Sannyāsīs, especially, should remove the knot of lust from their hearts and should avoid falling into the clutches of flattering followers or female disciples sent by the demigods to expose a so-called spiritual leader who is imperfect in Kṛṣṇa conscious knowledge.