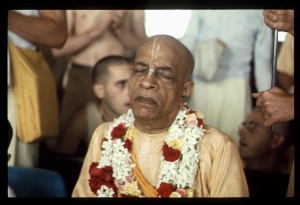 My dear Dhruva, you thought that the Yakṣas killed your brother, and therefore you have killed great numbers of them. But by this action you have agitated the mind of Lord Śiva's brother Kuvera, who is the treasurer of the demigods. Please note that your actions have been very disrespectful to Kuvera and Lord Śiva.

Lord Manu stated that Dhruva Mahārāja had been offensive to Lord Śiva and his brother Kuvera because the Yakṣas belonged to Kuvera's family. They were not ordinary persons. As such, they have been described as puṇya janān, pious men. Somehow or other the mind of Kuvera had been agitated, and Dhruva Mahārāja was advised to pacify him.