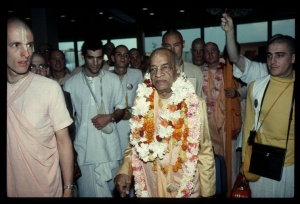 During the rainy season, water is generated from the sun, and in due course of time, during the summer season, the very same water is again absorbed by the sun. Similarly, all living entities, moving and inert, are generated from the earth, and again, after some time, they all return to the earth as dust. Similarly, everything emanates from the Supreme Personality of Godhead, and in due course of time everything enters into Him again.

Because of their poor fund of knowledge, impersonalist philosophers cannot understand how everything comes out from the Supreme person and then merges into Him again. As Brahma-saṁhitā (BS 5.38) confirms:

Transcendental rays emanate from the body of Kṛṣṇa, and within those rays, which are the Brahman effulgence, everything is existing. This is confirmed in Bhagavad-gītā (BG 9.4). Mat-sthāni sarva-bhūtāni. Although Kṛṣṇa is not personally present everywhere, His energy is the cause of all creation. The entire cosmic manifestation is nothing but a display of Kṛṣṇa's energy.

The two examples given in this verse are very vivid. During the rainy season, the rain, by rejuvenating the production of vegetables on earth, enables man and animals to obtain living energy. When there is no rain, food is scarce, and man and animal simply die. All vegetables, as well as moving living entities, are originally products of the earth. They come from the earth, and again they merge into the earth. Similarly, the total material energy is generated from the body of Kṛṣṇa, and at such a time the entire cosmic manifestation is visible. When Kṛṣṇa winds up His energy, everything vanishes. This is explained in a different way in Brahma-saṁhitā (BS 5.38):

This entire material creation comes from the body of the Supreme Personality of Godhead and at the time of annihilation again enters into Him. This process of creation and dissolution is made possible by the breathing of the Mahā-Viṣṇu, who is only a plenary portion of Kṛṣṇa.