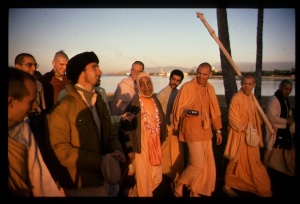 As pouring water on the root of a tree energizes the trunk, branches, twigs and everything else, and as supplying food to the stomach enlivens the senses and limbs of the body, simply worshiping the Supreme Personality of Godhead through devotional service automatically satisfies the demigods, who are parts of that Supreme Personality.

Sometimes people ask why this Kṛṣṇa consciousness movement simply advocates worship of Kṛṣṇa to the exclusion of the demigods. The answer is given in this verse. The example of pouring water on the root of a tree is very appropriate. In Bhagavad-gītā (BG 15.1) it is said, ūrdhva-mūlam adhaḥ-śākham: this cosmic manifestation has expanded downward, and the root is the Supreme Personality of Godhead. As the Lord confirms in Bhagavad-gītā (BG 10.8), ahaṁ sarvasya prabhavaḥ: "I am the source of all spiritual and material worlds." Kṛṣṇa is the root of everything; therefore rendering service to the Supreme Personality of Godhead, Kṛṣṇa (kṛṣṇa-sevā), means automatically serving all the demigods. Sometimes it is argued that karma and jñāna require a mixture of bhakti in order to be successfully executed, and sometimes it is argued that bhakti also requires karma and jñāna for its successful termination. The fact is, however, that although karma and jñāna cannot be successful without bhakti, bhakti does not require the help of karma and jñāna. Actually, as described by Śrīla Rūpa Gosvāmī, anyābhilāṣitā-śūnyaṁ jñāna-karmādy-anāvṛtam: (CC Madhya 19.167) pure devotional service should not be contaminated by the touch of karma and jñāna. Modern society is involved in various types of philanthropic works, humanitarian works and so on, but people do not know that these activities will never be successful unless Kṛṣṇa, the Supreme Personality of Godhead, is brought into the center. One may ask what harm there is in worshiping Kṛṣṇa and the different parts of His body, the demigods, and the answer is also given in this verse. The point is that by supplying food to the stomach, the indriyas, the senses, are automatically satisfied. If one tries to feed his eyes or ears independently, the result is only havoc. Simply by supplying food to the stomach, we satisfy all of the senses. It is neither necessary nor feasible to render separate service to the individual senses. The conclusion is that by serving Kṛṣṇa (kṛṣṇa-sevā), everything is complete. As confirmed in Caitanya-caritāmṛta (CC Madhya 22.62), kṛṣṇe bhakti kaile sarva-karma kṛta haya: if one is engaged in the devotional service of the Lord, the Supreme Personality of Godhead, everything is automatically accomplished.