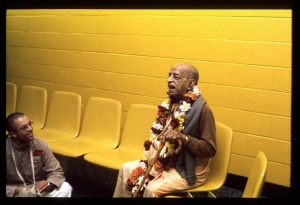 Dear Lord, O personified Vedic knowledge, in the past millennium, long, long ago, when You appeared as the great boar incarnation, You picked up the world from the water, as an elephant picks up a lotus flower from a lake. When You vibrated transcendental sound in that gigantic form of a boar, the sound was accepted as a sacrificial hymn, and great sages like Sanaka meditated upon it and offered prayers for Your glorification.

A significant word used in this verse is trayī-gātra, which means that the transcendental form of the Lord is the Vedas. Anyone who engages in the worship of the Deity, or the form of the Lord in the temple, is understood to be studying all the Vedas twenty-four hours a day. Simply by decorating the Deities of the Lord, Rādhā and Kṛṣṇa, in the temple, one very minutely studies the injunctions of the Vedas. Even a neophyte devotee who simply engages in the worship of the Deity is understood to be in direct touch with the purport of Vedic knowledge. As confirmed in Bhagavad-gītā (BG 15.15), vedaiś ca sarvair aham eva vedyaḥ: the purport of the Vedas is to understand Him, Kṛṣṇa. One who worships and serves Kṛṣṇa directly has understood the truths of the Vedas.