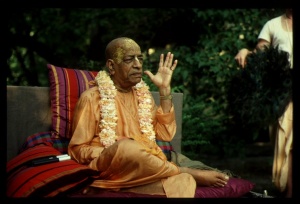 Dear Lord, we were awaiting Your audience because we have been unable to perform the yajñas according to the Vedic rituals. We pray unto You, therefore, to be pleased with us. Simply by chanting Your holy name, one can surpass all obstacles. We offer our respectful obeisances unto You in Your presence.

The brāhmaṇa priests were very hopeful that their sacrifice would be carried out without obstacles now that Lord Viṣṇu was present. It is significant in this verse that the brāhmaṇas say, "Simply by chanting Your holy name we can surpass the obstacles, but now You are personally present." The performance of yajña by Dakṣa was obstructed by the disciples and followers of Lord Śiva. The brāhmaṇas indirectly criticized the followers of Lord Śiva, but because the brāhmaṇas were always protected by Lord Viṣṇu, Śiva's followers could not do any harm to their prosecution of the sacrificial process. There is a saying that when Kṛṣṇa protects someone, no one can do him harm, and when Kṛṣṇa wants to kill someone, no one can protect him. The vivid example was Rāvaṇa. Rāvaṇa was a great devotee of Lord Śiva, but when Lord Rāmacandra wanted to kill him, Lord Śiva could not protect him. If some demigod, even Lord Śiva or Lord Brahmā, wants to do harm to a devotee, Kṛṣṇa protects the devotee. But when Kṛṣṇa wants to kill someone, such as Rāvaṇa or Hiraṇyakaśipu, no demigod can protect him.