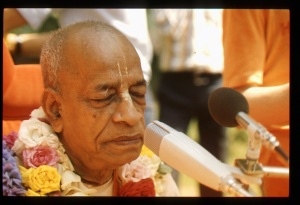 O my friends, sons of demons! In this material world, even those who are apparently advanced in education have the propensity to consider, "This is mine, and that is for others." Thus they are always engaged in providing the necessities of life to their families in a limited conception of family life, just like uneducated cats and dogs. They are unable to take to spiritual knowledge; instead, they are bewildered and overcome by ignorance.

In human society there are attempts to educate the human being, but for animal society there is no such system, nor are animals able to be educated. Therefore animals and unintelligent men are called vimūḍha, or ignorant, bewildered, whereas an educated person is called vidvān. The real vidvān is one who tries to understand his own position within this material world. For example, when Sanātana Gosvāmī submitted to the lotus feet of Śrī Caitanya Mahāprabhu, his first question was ke āmi, kene āmāya jāre tāpa-traya. In other words, he wanted to know his constitutional position and why he was suffering from the threefold miseries of material existence. This is the process of education. If one does not ask, "Who am I? What is the goal of my life?" but instead follows the same animal propensities as cats and dogs, what is the use of his education? As discussed in the previous verse, a living being is entrapped by his fruitive activities, exactly like a silkworm trapped in its own cocoon. Foolish persons are generally encaged by their fruitive actions (karma) because of a strong desire to enjoy this material world. Such attracted persons become involved in society, community and nation and waste their time, not having profited from having obtained human forms. Especially in this age, Kali-yuga, great leaders, politicians, philosophers and scientists are all engaged in foolish activities, thinking, "This is mine, and this is yours." The scientists invent nuclear weapons and collaborate with the big leaders to protect the interests of their own nation or society. In this verse, however, it is clearly stated that despite their so-called advanced knowledge, they actually have the same mentality as cats and dogs. As cats, dogs and other animals, not knowing their true interest in life, become increasingly involved in ignorance, the so-called educated person who does not know his own self-interest or the true goal of life becomes increasingly involved in materialism. Therefore Prahlāda Mahārāja advises everyone to follow the principles of varṇāśrama-dharma. Specifically, at a certain point one must give up family life and take to the renounced order of life to cultivate spiritual knowledge and thus become liberated. This is further discussed in the following verses.