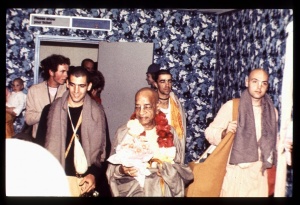 My dear friends, O sons of the demons, it is certain that no one bereft of knowledge of the Supreme Personality of Godhead has been able to liberate himself from material bondage at any time or in any country. Rather, those bereft of knowledge of the Lord are bound by the material laws. They are factually addicted to sense gratification, and their target is woman. Indeed, they are actually playthings in the hands of attractive women. Victimized by such a conception of life, they become surrounded by children, grandchildren and great-grandchildren, and thus they are shackled to material bondage. Those who are very much addicted to this conception of life are called demons. Therefore, although you are sons of demons, keep aloof from such persons and take shelter of the Supreme Personality of Godhead, Nārāyaṇa, the origin of all the demigods, because the ultimate goal for the devotees of Nārāyaṇa is liberation from the bondage of material existence.

Prahlāda Mahārāja has maintained the philosophical point of view that one should give up the dark well of family life and go to the forest to take shelter of the lotus feet of the Supreme Personality of Godhead (hitvātma-pātaṁ gṛham andha-kūpaṁ vanaṁ gato yad dharim āśrayeta (SB 7.5.5)). In this verse also, he stresses the same point. In the history of human society, no one, at any time or any place, has been liberated because of too much affection and attachment for his family. Even in those who are apparently very educated, the same family attachment is there. They cannot give up the association of their families, even in old age or invalidity, for they are attached to sense enjoyment. As we have several times discussed, yan maithunādi-gṛhamedhi-sukhaṁ hi tuccham: (SB 7.9.45) so-called householders are simply attracted by sexual enjoyment. Thus they keep themselves shackled in family life, and furthermore they want their children to be shackled in the same way. Playing the parts of playboys in the hands of women, they glide down to the darkest regions of material existence. Adānta-gobhir viśatāṁ tamisraṁ punaḥ punaś carvita-carvaṇānām (SB 7.5.30). Because they are unable to control their senses, they continue a life of chewing the chewed and therefore descend to the darkest material regions. One should give up the association of such demons and adhere to the association of devotees. Thus one will be able to be liberated from material bondage.