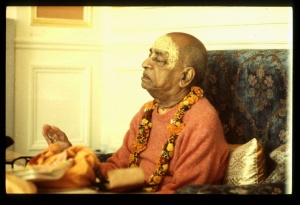 The Supreme Personality of Godhead, the supreme controller, who is infallible and indefatigable, is present in different forms of life, from the inert living beings [sthāvara], such as the plants, to Brahmā, the foremost created living being. He is also present in the varieties of material creations and in the material elements, the total material energy and the modes of material nature [sattva-guṇa, rajo-guṇa and tamo-guṇa], as well as the unmanifested material nature and the false ego. Although He is one, He is present everywhere, and He is also the transcendental Supersoul, the cause of all causes, who is present as the observer in the cores of the hearts of all living entities. He is indicated as that which is pervaded and as the all-pervading Supersoul, but actually He cannot be indicated. He is changeless and undivided. He is simply perceived as the supreme sac-cid-ānanda [eternity, knowledge and bliss]. Being covered by the curtain of the external energy, to the atheist He appears nonexistent.

Not only is the Supreme Personality of Godhead present as the Supersoul of all living entities; at the same time, He pervades everything in the entire creation. He exists in all circumstances and at all times. He exists in the heart of Lord Brahmā and also in the cores of the hearts of the hogs, dogs, trees, plants and so on. He is present everywhere. He is present not only in the heart of the living entity, but also in material things, even in the atoms, protons and electrons being explored by material scientists.

The Lord is present in three features—as Brahman, Paramātmā and Bhagavān. Because He is present everywhere, He is described as sarvaṁ khalv idaṁ brahma. Viṣṇu exists beyond Brahman. Bhagavad-gītā confirms that Kṛṣṇa, by His Brahman feature, is all-pervading (mayā tatam idaṁ sarvam (BG 9.4)), but Brahman depends upon Kṛṣṇa (brahmaṇo hi pratiṣṭhāham (BG 14.27)). Without Kṛṣṇa, there could be no existence of Brahman or Paramātmā. Therefore, Bhagavān, the Supreme Personality of Godhead, is the ultimate realization of the Absolute Truth. Although He is present as the Paramātmā in the core of everyone's heart, He is nonetheless one, either as an individual or as the all-pervading Brahman.

The supreme cause is Kṛṣṇa, and devotees who have surrendered to the Supreme Personality of Godhead can realize Him and His presence within the universe and within the atom (aṇḍāntara-stha-paramāṇu-cayāntara-stham (BS 5.35)). This realization is possible only for devotees who have fully surrendered unto the lotus feet of the Lord; for others it is not possible. This is confirmed by the Lord Himself in Bhagavad-gītā (BG 7.14):

The process of surrender in a devotional attitude is accepted by a fortunate living being. After wandering through many varieties of life on many planetary systems, when one comes to the real understanding of the Absolute Truth by the grace of a devotee, one surrenders to the Supreme Personality of Godhead, as confirmed in Bhagavad-gītā (bahūnāṁ janmanām ante jñānavān māṁ prapadyate (BG 7.19)).

Prahlāda Mahārāja's class friends, who were born of Daitya families, thought that realizing the Absolute was extremely difficult. Indeed, we have experience that many, many people say this very thing. Actually, however, this is not so. The Absolute, the Supreme Personality of Godhead, is most intimately related to all living entities. Therefore if one understands the Vaiṣṇava philosophy, which explains how He is present everywhere and how He acts everywhere, to worship the Supreme Lord or to realize Him is not at all difficult. Realization of the Lord, however, is possible only in the association of devotees. Therefore Śrī Caitanya Mahāprabhu, in His teachings to Rūpa Gosvāmī said (''CC Madhya'' 19.151):

The living entity in the material condition wanders through many varieties of life and many varieties of circumstances, but if he comes in contact with a pure devotee and is intelligent enough to take instructions from the pure devotee regarding the process of devotional service, he can understand the Supreme Personality of Godhead, the origin of Brahman and Paramātmā, without difficulty. In this regard, Śrīla Madhvācārya says:

The Lord is present as antaryāmī in everyone's heart and is visible in the individual soul covered by a body. Indeed, He is everywhere at every time and every condition, but because He is covered by the curtain of material energy, to an ordinary person there appears to be no God.