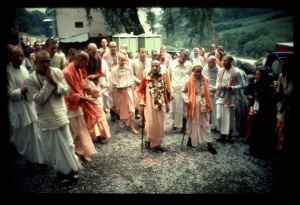 Therefore, my dear young friends born of demons, please act in such a way that the Supreme Lord, who is beyond the conception of material knowledge, will be satisfied. Give up your demoniac nature and act without enmity or duality. Show mercy to all living entities by enlightening them in devotional service, thus becoming their well-wishers.

The Lord says in Bhagavad-gītā (BG 18.55), bhaktyā mām abhijānāti yāvān yaś cāsmi tattvataḥ: "One can understand the Supreme Personality as He is only by devotional service." Prahlāda Mahārāja ultimately instructed his class friends, the sons of the demons, to accept the process of devotional service by preaching the science of Kṛṣṇa consciousness to everyone. Preaching is the best service to the Lord. The Lord will immediately be extremely satisfied with one who engages in this service of preaching Kṛṣṇa consciousness. This is confirmed by the Lord Himself in Bhagavad-gītā (BG 18.69). Na ca tasmān manuṣyeṣu kaścin me priya-kṛttamaḥ: "There is no servant in this world more dear to Me than he, nor will there ever be one more dear." If one sincerely tries his best to spread Kṛṣṇa consciousness by preaching the glories of the Lord and His supremacy, even if he is imperfectly educated, he becomes the dearmost servant of the Supreme Personality of Godhead. This is bhakti. As one performs this service for humanity, without discrimination between friends and enemies, the Lord becomes satisfied, and the mission of one's life is fulfilled. Śrī Caitanya Mahāprabhu therefore advised everyone to become a guru-devotee and preach Kṛṣṇa consciousness (yāre dekha, tāre kaha 'kṛṣṇa'-upadeśa (CC Madhya 7.128)). That is the easiest way to realize the Supreme Personality of Godhead. By such preaching, the preacher becomes satisfied, and those to whom he preaches are also satisfied. This is the process of bringing peace and tranquillity to the entire world.

The word sauhṛdam ("friendliness") is very significant in this verse. People are generally ignorant of Kṛṣṇa consciousness, and therefore to become their best well-wisher one should teach them about Kṛṣṇa consciousness without discrimination. Since the Supreme Lord, Viṣṇu, is situated in the core of everyone's heart, every body is a temple of Viṣṇu. One should not misuse this understanding as an excuse for such words as daridra-nārāyaṇa. If Nārāyaṇa lives in the house of a daridra, a poor man, this does not mean that Nārāyaṇa becomes poor. He lives everywhere—in the houses of the poor and those of the rich—but in all circumstances He remains Nārāyaṇa; to think that He becomes either poor or rich is a material calculation. He is always ṣaḍ-aiśvarya-pūrṇa, full in six opulences, in all circumstances.