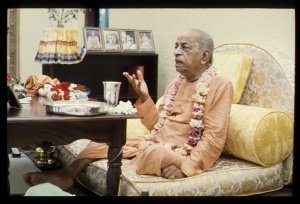 O King, when that uncontrollable poison was forcefully spreading up and down in all directions, all the demigods, along with the Lord Himself, approached Lord Śiva [Sadāśiva]. Feeling unsheltered and very much afraid, they sought shelter of him.

One may question that since the Supreme Personality of Godhead was personally present, why did He accompany all the demigods and people in general to take shelter of Lord Sadāśiva, instead of intervening Himself. In this connection Śrīla Madhvācārya warns:

Lord Viṣṇu was competent to rectify the situation, but in order to give credit to Lord Śiva, who later drank all the poison and kept it in his neck, Lord Viṣṇu did not take action.