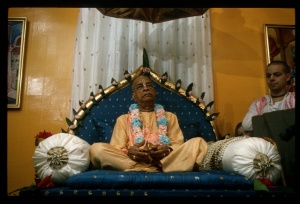 When the royal dynasty, being excessively proud because of the material modes of passion and ignorance, became irreligious and ceased to care for the laws enacted by the brāhmaṇas, Paraśurāma killed them. Although their offense was not very severe, he killed them to lessen the burden of the world.

The kṣatriyas, or the ruling class, must govern the world in accordance with the rules and regulations enacted by great brāhmaṇas and saintly persons. As soon as the ruling class becomes irresponsible in regard to the religious principles, it becomes a burden on the earth. As stated here, rajas-tamo-vṛtaṁ, bhāram abrahmaṇyam: when the ruling class is influenced by the lower modes of nature, namely ignorance and passion, it becomes a burden to the world and must then be annihilated by superior power. We actually see from modern history that monarchies have been abolished by various revolutions, but unfortunately the monarchies have been abolished to establish the supremacy of third-class and fourth-class men. Although monarchies overpowered by the modes of passion and ignorance have been abolished in the world, the inhabitants of the world are still unhappy, for although the qualities of the former monarchs were degraded by taints of ignorance, these monarchs have been replaced by men of the mercantile and worker classes whose qualities are even more degraded. When the government is actually guided by brāhmaṇas, or God conscious men, then there can be real happiness for the people. Therefore in previous times, when the ruling class was degraded to the modes of passion and ignorance, the brāhmaṇas, headed by such a kṣatriya-spirited brāhmaṇa as Paraśurāma, killed them twenty-one consecutive times.

In Kali-yuga, as stated in Śrīmad-Bhāgavatam (SB 12.2.13), dasyu-prāyeṣu rājasu: the ruling class (rājanya) will be no better than plunderers (dasyus) because the third-class and fourth-class men will monopolize the affairs of the government. Ignoring the religious principles and brahminical rules and regulations, they will certainly try to plunder the riches of the citizens without consideration. As stated elsewhere in Śrīmad-Bhāgavatam ((SB 12.1.40):

Being unpurified, neglecting to discharge human duties properly, and being influenced by the modes of passion (rajas) and ignorance (tamas), unclean people (mlecchas), posing as members of the government (rājanya-rūpiṇaḥ), will swallow the citizens (prājas te bhakṣayiṣyanti). And in still another place, Śrīmad-Bhāgavatam (SB 12.2.7-8) says:

Human society is naturally grouped into four divisions, as stated in Bhagavad-gītā (cātur-varṇyaṁ mayā sṛṣṭaṁ guṇa-karma-vibhāgaśaḥ (BG 4.13)). But if this system is neglected and the qualities and divisions of society are not considered, the result will be brahma-viṭ-kṣatra-śūdrāṇāṁ yo balī bhavitā nṛpaḥ: the so-called caste system of brāhmaṇa, kṣatriya, vaiśya and śūdra will be meaningless. As a result, whoever somehow or other becomes powerful will be the king or president, and thus the prajās, or citizens, will be so harassed that they will give up hearth and home and will go to the forest (yāsyanti giri-kānanam) to escape harassment by government officials who have no mercy and are addicted to the ways of plunderers. Therefore the prajās, or the people in general, must take to the Kṛṣṇa consciousness movement, the Hare Kṛṣṇa movement, which is the sound incarnation of the Supreme Personality of Godhead. Kali-kāle nāma-rūpe kṛṣṇa-avatāra: Kṛṣṇa, the Supreme Personality of Godhead, has now appeared as an incarnation by His holy name. Therefore, when the prajās become Kṛṣṇa conscious, they can then expect a good government and good society, a perfect life, and liberation from the bondage of material existence.