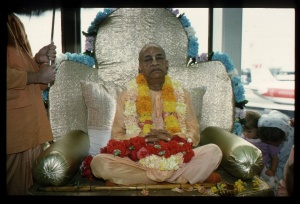 Pradyumna: (reading) ". . . may be divided into two classes: one class may be for achieving a certain goal, and the other may be for avoiding some unfavorable circumstance. In Sanskrit these activities are called pravṛtti and nirvṛtti, positive and negative action.

"There are many examples of negative action. For example, a diseased person has to be cautious and take medicine in order to avoid some unfavorable illness. Those who are cultivating spiritual life and executing devotional service are always engaged in activity. Such activity can be performed with the mind or with the . . . with the body or with the mind."

"Thinking, feeling and willing are all activities of the mind, and when we will do something, the activity comes to be manifest by the gross bodily senses. Thus, in our mental activities, we should always try to think of Kṛṣṇa and try to plan how to please Him, following in the footsteps of the great ācāryas and the personal spiritual master."

Prabhupāda: Hmm. So Kṛṣṇa consciousness is not inactivity. This we have discussed yesterday. Actually the activity is being influenced by the soul. But it is being expressed through intelligence, mind and body. The activities are coming from the spiritual platform, but because it is now contaminated by the material coverings, the activities are not very adjusted. Diseased activities.

The same feeling . . . nirbandhe kṛṣṇa-sambandhe yukta-vairāgyam ucyate (Brs 1.2.255). Śrīla Rūpa Gosvāmī has given us two formulas how to become Kṛṣṇa consciousness, or how to remain in Kṛṣṇa consciousness. So one formula is that anāsaktasya viṣayān yathārham upayuñjataḥ.

But it is used as material because we do not remember the relationship of these material elements with Kṛṣṇa. Therefore the conclusion is when we are forgetful of Kṛṣṇa, then it is material. Otherwise, there is nothing as material. Everything is spiritual. Because brāhmaṇaḥ śakti. It is described in the Viṣṇu Purāṇa, eka-deśa sthitasyāgner jyotsnā vistāriṇī yathā, sarvedaṁ brahmaṇaḥ śakti . . . (CC Madhya 20.110). I just don't remember the whole verse.

So if we think in that way, thinking, feeling and willing, if we utilize our psychological activities in Kṛṣṇa consciousness, then we keep steady in . . . attached with Kṛṣṇa. Yukta-vairāgyam ucyate. Vairāgya means renunciation. We do not require to renounce anything, provided we see everything dovetailed in Kṛṣṇa consciousness. That is required.

Pradyumna: "Similarly, we can offer many services with our bodily activities, but all such activities must be in relationship with Kṛṣṇa. This relationship is established by connecting oneself with the bona fide spiritual master who is the direct representative of Kṛṣṇa in disciplic succession. Therefore the execution of Kṛṣṇa consciousness activities with the body should be directed by the spiritual master and then performed with faith."

Just . . . somebody says that, "Kṛṣṇa appeared five thousand years ago. He's no longer present. Then how we shall execute Kṛṣṇa's order?" Kṛṣṇa's order can be executed by executing the order of the spiritual master. Yasya prasādād bhagavat-prasādo. We cannot disobey. Yasyaprasādād na gatiḥ kuto 'pi. This is the process.

Prabhupāda: Yes. We must connect with the current. Just like you have fitted your room with electrical wires, but if you do not touch it with the current going on, then simply electrical fitting with not help you. Similarly, initiation is essential. Ādau gurvāśrayam. Śrīla Rūpa Gosvāmī recommends in his Bhakti-rasāmṛta-sindhu for executing proper spiritual life, one must take shelter of the bona fide spiritual master. Tasmād guruṁ prapadyeta jijñāsuḥ śreyaḥ uttamam (SB 11.3.21). Person who is actually interested in uttamam. Uttamam means transcendental. Udgata-tamam, "after darkness." This material world is darkness. Tamasi mā jyotir gamaḥ. The spiritual world is full of light. Therefore anything spiritual, that is called uttamam.

There . . . Kṛṣṇa's another name is Uttama-śloka. Bhagavaty uttama-śloke bhaktir bhavati naiṣṭikī (SB 1.2.18). Kṛṣṇa does not belong to this material world. Only the fools and rascals, they think of Kṛṣṇa having material body. Avajānanti māṁ mūḍhāḥ mānuṣīṁ tanum āśritam (BG 9.11). Kṛṣṇa is always in His spiritual body, sac-cid-ānanda-vigraha. Īśvaraḥ paramaḥ kṛṣṇaḥ sac-cid-ānanda-vigrahaḥ (Bs. 5.1). Similarly, if we establish our bona fide relationship with the spiritual master, representative of Kṛṣṇa, immediately our connection with Kṛṣṇa becomes established.

Prabhupāda: So, parāsya śaktir vividhaiva śrūyate (Śvetāśvatara Upaniṣad 6.8, CC Madhya 13.65, purport). The Supreme Absolute Truth, Personality of Godhead, has got innumerable, multi-energies. Out of that, learned scholars, devotees, they have divided the whole energy into three: external, internal and marginal. So the living entities, they are production of the marginal energy. The living entity is energy, prakṛti, not the puruṣa. Puruṣa is Kṛṣṇa.

It is explained by Svarūpa Dāmodara: rādhā-kṛṣṇa-prakr . . . praṇaya-vikṛtir hlādinī śaktir asmād ekātmānāv api purā deha-bhedo gatau tau (CC Adi 1.5). Rādhā-Kṛṣṇa, They are one. But although They are one, They bifurcated Themselves as Rādhā and Kṛṣṇa. So there is no difference between Rādhā and Kṛṣṇa. Rādhā is the superior energy, or spiritual energy, and Kṛṣṇa is the energetic. Similarly, this material world is external energy. Similarly, the living entities, they're marginal energy—between the external and internal energy.

Nāhaṁ vipro na ca nara-patir (Padyāvalī 63): "I am neither brāhmin or kṣatriya or vaiśya and śūdra or sannyāsī or brahmacārī." This, this is a verse given by Lord Caitanya Mahāprabhu. He denies any material designation, and He informs us also that jīvera svarūpa haya nitya kṛṣṇa dāsa (CC Madhya 20.108-109). When we feel actually that, "I am eternal servant of Kṛṣṇa," that is our liberation. Hitvā anyathā rūpaṁ svarūpeṇa vyavasthitiḥ (SB 2.10.6). This is svarūpa. When you are existing as servant of Kṛṣṇa, then you are mukta, liberated. You haven't got to endeavor separately for becoming free or liberated.

Pradyumna: "Then there is the spiritual world, which is a manifestation of the internal energy. The living entities who are called marginal energies . . . energy, perform material activities when acting under the inferior, external energy. And when they engage in activities under the internal, spiritual energy, their activities are called Kṛṣṇa conscious. This means that those who are great souls, or great devotees, do not act under the spell of material energy, but act instead under the protection of the spiritual energy."

Prabhupāda: Hmm. Mahātmānas tu māṁ pārtha daivīṁ prakṛtim āśritāḥ (BG 9.13). They do not act under the influence . . . ordinary persons, they see that, "Devotees are acting like us." No. Their activities are under the influence of spiritual energy. It, it, it looks similar like the karmīs, jñānīs, but bhaktas are different from karmīs and jñānīs. Jñāna-karmādy-anāvṛtam (CC Madhya 19.167). They are not influenced by the tenets of jñāna and karma. They are influenced by activities which can satisfy Kṛṣṇa. Ānukūlyena kṛṣṇānuśīlanam. Anuśīlanam activities, culture. Ānukūlyena kṛṣṇānuśīlanam.

So they are simply engaged in Kṛṣṇa activities, although it looks similar to the ordinary activities. Therefore they misunderstand. Just like Arjuna. Arjuna is fighting, and another soldier is fighting the other side. But Arjuna's activities as soldier is devotional service, because he's trying to please Kṛṣṇa. Other side, they're fighting for their own interest, how to become victorious and take up the kingdom. That was their idea.

Here, Arjuna, he did not like to fight, but when he understood that, "Kṛṣṇa desires this fighting," he engaged in it. Therefore his fighting was to satisfy Kṛṣṇa, not to satisfy his senses. As it is explained in the Caitanya-caritāmṛta, to satisfy one's own senses, that is called kāma, and to satisfy the senses of Kṛṣṇa, that is called prema. That is the difference.

Pradyumna: "Any activities done in devotional service, or in Kṛṣṇa consciousness, are directly under the control of spiritual energy. In other words, energy is a sort of strength, and this strength can be spiritualized . . ."

Pradyumna: "In other words, energy is a sort of strength, and this strength can be spiritualized by the mercy of both the bona fide spiritual master and Kṛṣṇa."

Prabhupāda: Yes. This is the statement in the Caitanya-caritāmṛta.

Kṛta-puṇya-puñjāḥ. These boys who are playing with Kṛṣṇa as cowherd boys, they are not ordinary boys, Śukadeva Gosvāmī says. They are kṛta-puṇya-puñjāḥ. For many, many life they accumulated their pious activities, and thus now they have got the association of Kṛṣṇa to play with Him. Kṛta-puṇya-puñjāḥ.

So bīja means seed. Bhakti-latā seed. Bhakti's compared just like a creeper. The creeper does not stand alone; it embraces another tree, and then it grows. Similarly, bhakti-latā, bhakti always embraces the lotus feet of Kṛṣṇa, and then grows. Therefore it is called bhakti-latā. So bhakti-latā-bīja. If one is fortunate, by accumulating this imperceptible good activities by association with devotees, then he gets this bhakti-latā-bīja, the seed of bhakti-latā.

So Caitanya Mahāprabhu recommends, mālī hañā bīja kare āropana. Just like you get some nice seed of rose flower. So if you sow it on the ground, just becoming a nice gardener, and pour water, then it gradually grows. So we have to take the bhakti-latā-bīja from the bona fide spiritual master and sow it within the heart, taj-joṣaṇād āśv apavarga-vartmani śraddhā bhaktir anukramiṣyati (SB 3.25.25), and pour water. Just like simply sowing the seed is not your business is finished. You have to sow . . . you have to pour water. So what is that pouring water?

So you take the bhakti-latā-bīja from the spiritual master—that is called initiation—and develop it by pouring water of hearing and chanting. Then it will grow. One day it will grow so big that it will penetrate the walls of this universe. It will go to the spiritual world and gradually go to the Goloka Vṛndāvana, and catch up the lotus feet of Kṛṣṇa, and then produce its fruits, and you will enjoy by eating the fruits.

Go on. What is the time?