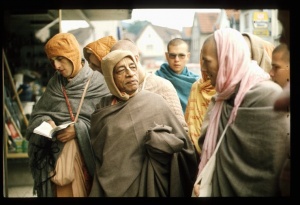 Lord Janārdana took the conchshell that had grown around the demon's body and went back to the chariot. Then He proceeded to Saṁyamanī, the beloved capital of Yamarāja, the lord of death. Upon arriving there with Lord Balarāma, He loudly blew His conchshell, and Yamarāja, who keeps the conditioned souls in check, came as soon as he heard the resounding vibration. Yamarāja elaborately worshiped the two Lords with great devotion, and then he addressed Lord Kṛṣṇa, who lives in everyone's heart: "O Supreme Lord Viṣṇu, what shall I do for You and Lord Balarāma, who are playing the part of ordinary humans?"

The conchshell the Lord took from Pañcajana, which is called Pāñcajanya, is the same one He sounded at the beginning of the Bhagavad-gītā. According to the ācāryas, Pañcajana had become a demon in a way similar to that of Jaya and Vijaya. In other words, though appearing in the form of a demon, he was actually a devotee of the Lord. The Skanda Purāṇa, Avanti-khaṇḍa, describes the wonderful things that happened when Lord Kṛṣṇa sounded His conchshell:

"The hell known as Asipatra-vana lost the sharp, swordlike leaves on its trees, and the hell named Raurava became free of its ruru beasts. The Bhairava hell lost its fearfulness, and all cooking stopped in the Kumbhīpāka hell."

"Their sinful reactions eradicated, all the inhabitants of hell attained liberation and approached the spiritual world."